skip to main | skip to sidebar

Lying Chart Of The Day, Classic Edition | The New Republic

Raul Grijalva is at it again. Less than a month after nearly losing his seat to a conservative, Raul is back to using made up statistics to argue for the redistribution of wealth. This time he quotes an article that claims Bush tax cuts resulted in massive loss of revenue for liberals to spend on their programs. What he and the liberal article fail to mention is the little caveat at the bottom of the graph, "as a percentage of GDP!
Lying Chart Of The Day, Classic Edition | The New Republic
GDP figures below show that with each reduction in taxes in 1980 and 2004 there was a corresponding increase in GDP. Oh, and the Grijalva and his lib sources also fail to mention that "real" tax income increased during those periods. Quite a big error on their part!

According to Arizona District 7 Rep Raul Grijalva, the reason for the failure of Obamacare, deeper Recession, higher unemployment and and spiraling housing prices? Well, three of four would all be Bush's fault, but, according to Grijalva, Dem's simply didn't burden our children with enough debt:


The party should have added a public option to the health-care reform bill and focused more on job creation in the American Recovery and Reinvestment Act, plus other "bold initiatives that were compromised out by people in more vulnerable districts," he said.

See, in Grijalvanomics, The way to solve economic problems is to spend more. if your pay goes down at work, ignore reality and spend more. Can't afford car payments? buy a bigger car! Like your doctor? keep him/her but spend more. Want to earn enough money to take care of yourself? Screw You!
See in Obamaland, the only thing that matters is fixing wrongs. wrongs from 200 years ago, wrongs that have already been fixed or can't be fixed, wrongs that might occur in the future, imaginary wrongs; none of that matters. Democrats WILL fix all the wrongs. or they will DO something to fix all the wrongs even if what they do is stupid and creates more wrong than it fixes. You see Dems don't care about actually fixing anything, they care about people associating DEMOCRAT with FIX.
The problem is that some things can't be fixed. some things must be lived with, handled head on, or ignored. Democrats like Grijalva can't deal with that.
Posted by Arthur Wallace at 12:01 AM No comments:

Nogales Mayor Arrest: Did He do anything Really Wrong? 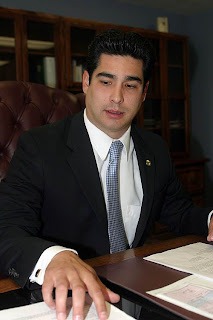 Nogales mayor Octavio Garcia-Von Borstel's recent arrest on fraud charges sounds like a problem for Dems in Southern Arizona, or is it just Democrats throwing Garcia-Von Borstel and his father under the bus for something that stretches far beyond the mayor's office? The story broke today with an announcement by Terry Goddard, attorney general and Dem nominee for Governor. Why a Dem breaking a story about  another Dem doing what Democratic border mayors have always done? Two possible reasons: A) the FBI and DEA are running the show and, fearful of Von Borstel and his father breaking for Mexico, decided on the time and place for the arrests, giving Goddard a chance to make the announcement at the last minute. or 2) Goddard, aware that this corruption could break much deeper and worse if it broke closer to November for reelection of Democrats in Southern Arizona. Either way, the arrest of a 21 year-old mayor and his father with 3 million in laundered money is just the tip of the iceberg.
But are the actions of Garcia-von Borstal (asking businesses for "protection money" for contracts and funds) any different than those of District 7's own Raul Grijalva. Both were born in Mexico and came to Southern Arizona on free rides. While Grijalva has never "worked" for himself, Von Borstal is a successful businessman. Von Borstal could claim he was helping both businesses and the city. Grijalva claims he is helping Arizona. Von Borstal allegedly took money from businesses and deposited the money in his father's cash loan business. Grijalva takes money from unions and liberal interests and "launders" them in his campaign accounts. Von Borstal shaves daily and wears a tie, Grijalva . . . wears a bolo.
My point is that Democratic politicians, no matter what the level, are basically all master's of extortion. Some just get caught, and that really isn't fair.
Posted by Arthur Wallace at 7:09 PM No comments: 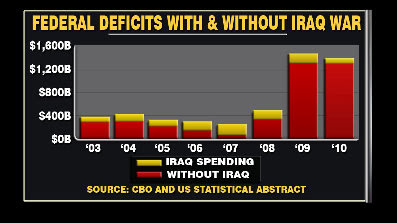 For months, Raul Grijalva has poo-pooed criticism of his party for massive partisan spending on the stimulus, saying:


"Bringing the troops home is necessary not just for the future of Iraq, but also for the people of the United States. We must stop the hemorrhaging of tax dollars that could go to meet our Nation's vital domestic needs."

Now statistics from the Congressional Budget Office tell the real story. While Dems have complained about the cost of the Iraq War and Bush administration spending, real figures show that military spending is but a trickle compared to Obama's "War on Americans." Furthermore, contrary to Grijalva's claim that spending under Bush increased, CBO figures show budget decreased up to the bank bailouts of '08 (including the "summer stimulus of '08 where every taxpayer received a check from the IRS). All that domestic spending in '08 (supported, and approved by the Democratic controlled Congress) amounts to a quarter of Democratic spending in '09 (and guess what, most of the banking bailouts were spent last year also). So with all this spending, shouldn't the economy be recovering? No, because spending by itself doesn't bring long-term impact on the economy; confidence does. The American business has no confidence in this Congress or this president. Bring Grijalva home:

How many times will this Congress waste time on an issue that a majority of Americans do not want?
Raul Grijalva

Posted by Arthur Wallace at 6:16 AM No comments:

If the Shoe Fits?

Posted by Arthur Wallace at 12:50 PM No comments:

A Mosque At Ground Zero by Any Other Name . . .

This from the Associated Press this week after repeated faux paux's by the President last week over the Mosque intended for downtown New York:

WE WILL CHANGE OUR SLUG ON THIS STORY LATER TODAY from “BC-Ground Zero Mosque” to “BC-NYC Mosque.”

Like changing the "Stimulus Package," to "the Jobs Bill," changing the words, doesn't change the intent. A Mosque at Ground Zero, by any other name is still a Mosque at ground zero.
Posted by Arthur Wallace at 5:48 AM 1 comment:

While you won't hear about it on the Today show or NBC Nightly News, business media is going after the Obama administration for its poor handling of the economy. Check it out:
The Wall Street Journal

Now if people who don't know how to balance a checkbook would just listen.
Posted by Arthur Wallace at 6:46 AM 6 comments:

Who am I? Like yourself, I am a concerned citizen who is sick of elected officials who's only concern is their own political future. In 1994 I moved to southern Arizona to work and live because of the large number of jobs being created in this fabulous state. Like most Arizonans I value the freedom of economic opportunity that this state is known for and that has helped us to thrive. Unfortunately, many politicians, having passed themselves off as sharing these values, now promote a socialistic agenda, wanting to spend the wealth that Arizonan's create on large government and programs that stifle creativity and initiative. I wish to be a voice in opposition to these charlatans. Enjoy my blog.